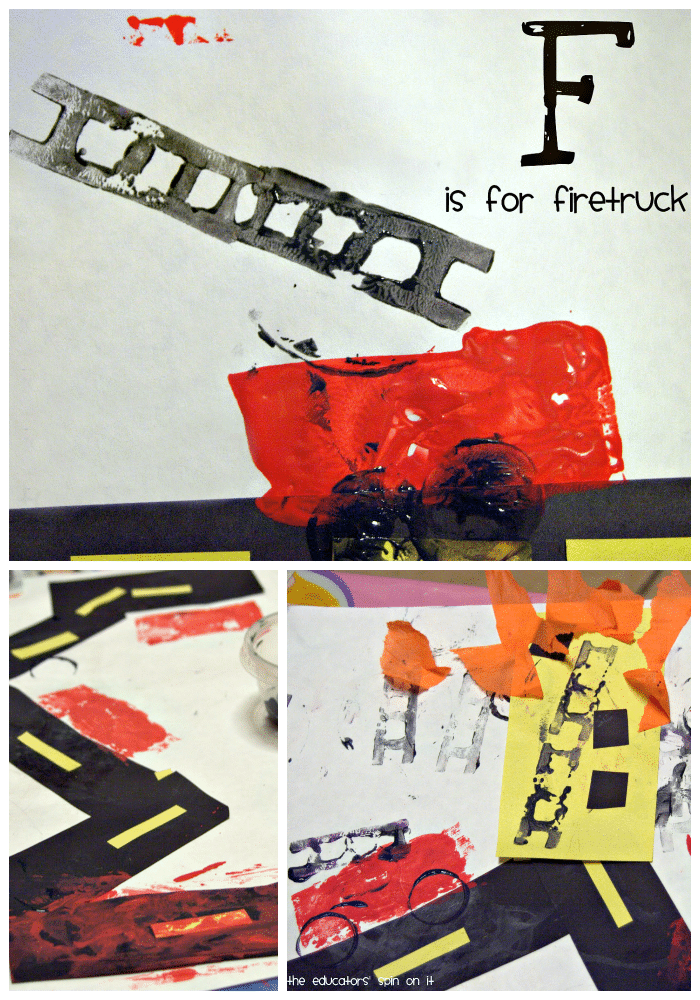 October is Fire Safety Month!  It’s never to young to begin to teach your child fire safety, plus I think fire trucks and all cars with sirens are one of the first things a child recognizes and gets excited about when they see them from their car seats.  We took the opportunity to schedule a tour at our local fire station.  It’s important for children to see what a fire fighter looks like  in uniform so they know they are our friends.  The crew at our station did a terrific job making it a kid friendly experience to show our little two year old that they are helpers and real people.  They even got down on the floor to let the children touch his jacket, boots and hat.  Our brand new fire fighter was just about to sing with the kids when the call went out and within 1 minute they were gone and off to keep someone safe.

Here are a few firefighter songs that we sang this week as we drove our cardboard firetrucks around the house.

The Wheels on the Firetruck
{Use the siren, ladder, seat belts, and so on with everything on the firetruck } 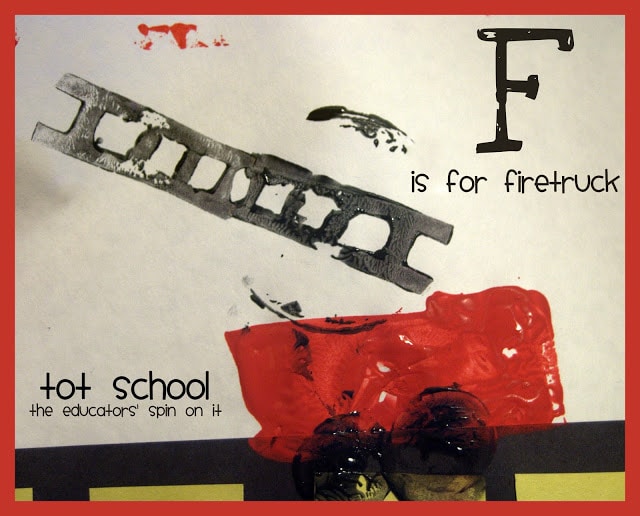 This week we spent time focusing on the words hot and cold.  We did have a few pumpkin candles lit and talked about no touching and how they are hot.

We counted firetrucks as we painted them and also talked about the shapes we were using to paint our fire trucks.  We worked on identifying rectangles and circles throughout the week. 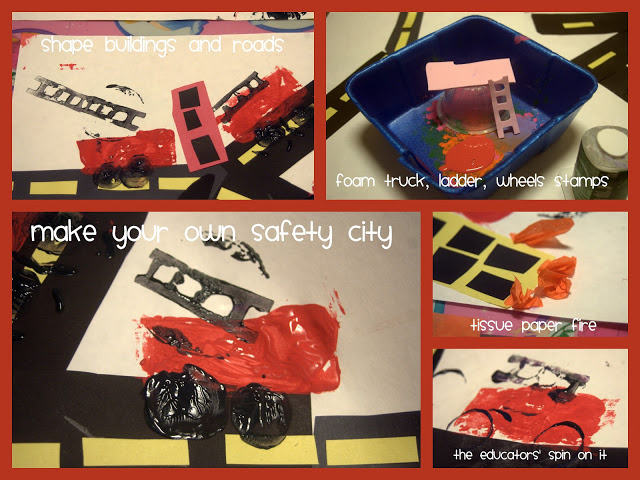 We had so much fun creating our own  firetrucks to drive on the roads.  My 22 month old is pretty interested in using the glue stick so they was a fun activity for her and glueing down all the roads and yellow lines.  Once we were done with that we used a rectangle and red paint to create the truck.  Then we used black paint and a circle stamp for the wheels.  We used to types of circles for fun.  Then I cut a ladder out from foam and used that to stamp the ladders. 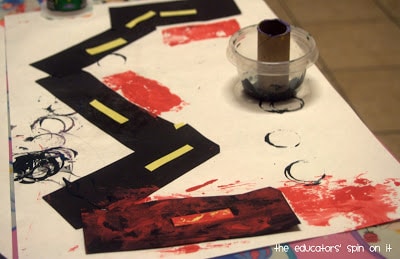 My 6 year old came up with the idea for adding the buildings and fire. We quickly grabbed some scrap paper and cut out rectangles to glue down and a few squares for windows. Then we found orange tissue paper to glue on. You could have easily painted them too but since my is really interested in the glue stick we did more glueing.  This turned out to be a fun sibling activity since they would both do it at their own levels too. 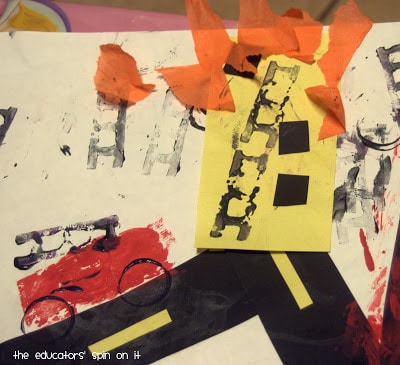 I was simply impressed with how quickly my 22 month old was able to grasp the concept of a firetruck and even starting saying the word before the end of the day.  Of course it still needs more practice but she most certainly knows what she is saying every time she sees one.  Makes me feel a little more comfortable that if something were to ever happen she knows that it’s a helpful truck and helpful people there to help us. 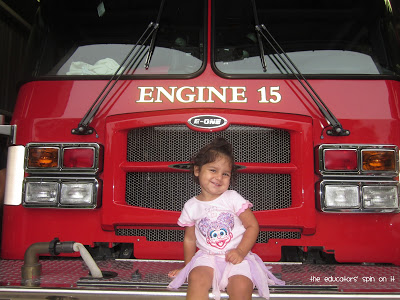 Here’s what’s on our Bookshelf this Week: Fire Safety Books

Here’s what in our Toy Box this week: Fire Safety Toys

I haven’t shown this video of Elmo to my youngest daughter yet but with my older one when she was around 3 really enjoyed it and learned from it.  It addresses the issues of fear with Elmo and Maria does a great job of walking him through things for him to understand. 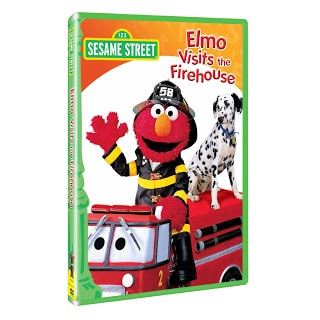 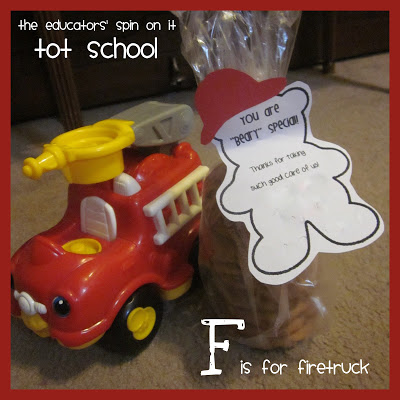 We shared a special cookie treat with our firefighters when we went for a visit.  We attached this Bear with a Fire Hat note too.  We can’t thank them enough for all the do for our families.  Hope you have a great time learning about Fire Safety with your little one!

« Teaching Children About Hunger and Giving: Snapshots of Parenting with Purpose
Our Favorite Fall Activities from After School Express » 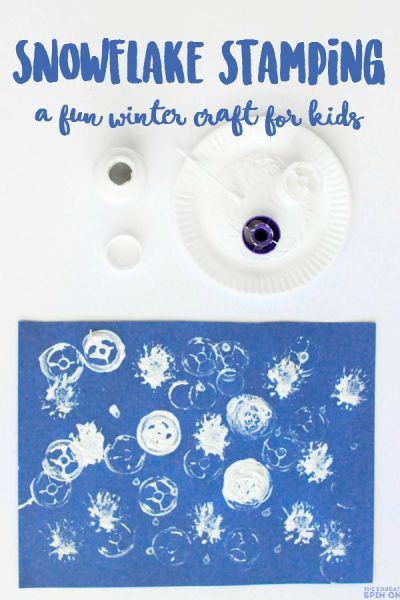